The Arrival of Amazon: What Does This Mean For Australia

Since the beginning of the year, Australia has braced itself for the arrival of the world’s largest internet retailer. For the everyday consumer, Amazon’s cutting-edge logistics and procurement means access to more products at cheaper prices. For the e-commerce entrepreneur, an integrated selling platform which automates fulfilment and shipping processes means anyone can start their own online-selling empire without leaving the couch. But for traditional brick and mortar retailers, such as Harvey Norman, David Jones and JB Hi-Fi, that have historically been the go to option for consumer electronics and home appliances, the outlook is a little more ominous.

How iconic Australian retail chains plan to compete with this multi-national corporation remains to be seen. Amazon’s planned roll out of additional services, such as AmazonFresh, means that even Coles and Woolies are in the firing line as they, amongst many others, prepare to grapple with what is tipped to be ‘the biggest shake-up in retail in a generation.’ 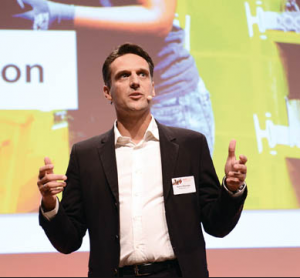 First and foremost, Amazon.com.au functions as an online selling platform for internal and third party products, delivering value via product choice and the speed in which goods are ordered and received. Previously, Australian consumers would expect to wait up to 12 days to receive orders from its US site. But with the help of newly built 24,000 sqm Dandenong fulfilment centre and Amazon’s premium subscription service due to launch mid next year, AmazonPrime, some Aussies can expect their new stainless-steel drink bottle to arrive within 24 hours.

Delivery speed is a hallmark of Amazon’s offering, working to drive its popularity in other markets. Next day delivery will cost Aussies $9.99 in Sydney, Melbourne, Brisbane, Adelaide and Canberra. Customers in Perth and regional cities in Victoria and NSW will pay $11.99 for delivery within two days, while priority shipping to all other areas will cost $19.99. If you’re prepared to wait 3-7 days and your order is worth more than $49, shipping is free of cost.

However, Aussie retailers are no slouch in this department either. Without the need to purchase a subscription, same day delivery to metro areas is available across most major sellers at reasonable prices. Relying on partnerships with logistical providers such as Shippit and Australia post’s ‘Shipster,’ JB Hi-Fi and Myer are particularly competitive with Amazon’s delivery options.

Operating in a country with the 7th lowest population density and building infrastructure from scratch is an onerous task. Amazon has already attracted some negative press as it can’t match the shipping times of local retailers. Considering that Aussies already have fast online access to retail goods, there could be less ‘wow’ factor surrounding Amazon’s delivery capabilities.

Although their product lines compete directly with that of traditional retailers, Amazon’s price points are somewhat underwhelming. For months, industry analysts have told us that Amazon will be operating at a loss in Australia in a bid to dominate the market. But it has become clear that prices are not as all-conquering as many were expecting. Some prices are competitive, others average and a few which are downright terrible.

In the big market for consumer electronics, the fresh-off-the-press iPhone 7 Plus (128GB 4G LTE) will set you back $1375 which is more expensive than buying from Apple directly at an $1199 price tag. There is also disparity in the price of action cams with The GoPro HERO 5 Session clocking in at $429.99 on Amazon whilst Harvey Norman sells it for $398. However, there are still some impressive bargains to be had if you’re happy to trawl through retail sites and compare prices. 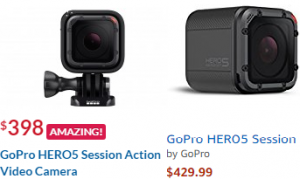 Perhaps the process of wrestling market share away from traditional retailers will not be as easy as everyone thought. Harvey Norman chairman Gerry Harvey seems confident in their ability to compete with the American juggernaut; ‘It’s not a simple case of Amazon coming in and eating our lunch – we’ll be the most formidable competitor they’ve ever seen.’

Can We Beat Them or Do We Join Them?

Already, over 500 Australian businesses are signed up to sell their products via Amazon’s local platform. For $39.99 per month and a percentage of sales, ‘Professional’ sellers (40+ sales volume per month) gain access to a world-wide selling platform and state-of-the-art distribution. The reality is that Amazon doesn’t want to destroy business; it just wants a piece of the action. Amazon will be doing a lot of the heavy lifting for start-ups and e-commerce traders as it invests considerably to gain exposure and market share. It is time to put some thought into how to optimise your business around Amazon market place as those who ignore it could put themselves at a disadvantage.

However, rules and fees are subject to change and more importantly, there is nothing to stop 100s of others (including Amazon) replicating your products. This puts pressure on your bottom line as being the cheapest seller is key. As an alternative, businesses could invest the fees they would otherwise pay selling platforms to strengthen their own operations. Putting more effort into website improvement, SEO and optimising media spend builds your own brand equity. At Nunn media, we work with a number of retail clients to ensure their offline/online media, content and search strategies are primed to perform in an increasingly crowded environment. 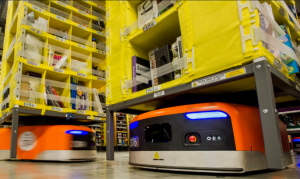 The threat is real for traditional Aussie retailers who hold a dominant position in consumer electronics, home appliances and retail clothing markets. Amazon doesn’t pay any of the overheads associated with physical stores and sales staff, it has robots that automate fulfilment processes, access to economies of scale and a global distribution network. Hence, once the dust has settled, we should expect to see more competitive prices across the board. 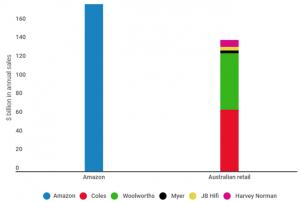 So where does that leave our beloved retail chains such as JB Hi-Fi, Harvey Norman, Myer and David Jones? AAP reported last month that Amazon could own 8% of Australia’s consumer electronics market within just five years, pushing major Aussie players to close stores. With continuous pressure to drop prices, retailers will need to get creative to keep people coming through their doors. Cutting back media spend or closing stores to reduce costs is a Band-Aid solution that will only serve to hurt their longevity.

If it isn’t viable for Aussie retailers to compete on the basis of price and product choice, they need to focus on what they have that Amazon doesn’t – service. Building relationships with customers from the moment they engage in the purchase process is integral to remaining competitive. This means putting effort into loyalty programs, events, demonstrations, training sales staff and anything that makes customers feel valued. Selling products that require post-purchase interaction is an effective way to build a community which services loyal customers. In the long-term, it would be smart for retailers to focus on a product line which delivers the opportunity for more interaction with clients.

Previously, we have seen IBM admit defeat in the hardware category and reinvent itself as a world leader in innovative business solutions. Perhaps Australian businesses should seek to adapt as opposed to competing head on with Amazon in its strongest categories. Harvey Norman is tipped to suffer less than JB Hi-Fi because of its hand in furniture and home appliances; products that require physical sales interaction rather than being a one-time purchase. It’s safe to assume that ordering a new lounge set online makes consumers more nervous than buying an iPhone case. Retailers need to know this and leverage themselves via their service elements. As Amazon moves in, perhaps it’s time for Aussie retailers to invest more in products that are complementary to service efforts. 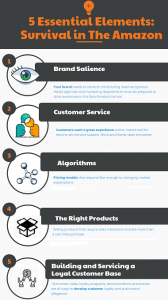